I was fortunate during my time in the city in that my daily commute was easier than any other commute I’ve ever had. No joke. I never encountered the problems that the freeway commuters have to fight each day because I could use less-congested roads.

When I do have to take the freeways at certain times, though, I get a taste of “rush” hour.

Today was a typical Monday. I was headed out of town to take care of some errands related to the majesty of moving (another story for another day). At all of the major interchanges, I had enough time sitting still to take in the “scenery,” and by “scenery” I mean scattered litter and smoke-belching tractor-trailers. I always budget my time to account for any potential problems, so I wasn’t rushed, which is good, because there’s nothing rushed about “rush” hour.

Three days later–or thirty minutes later, I think–I crossed the river into Arkansas and watched as the traffic began to thin. I figured I was about two towns away from being able to turn on the cruise control.

Before I was past the first town, I was rounding a corner with one tractor-trailer on my left, keeping pace with me the whole way. An on-ramp was to my right.

Annnnnd directly in the middle of my lane–there it was. The banana peel of the Interstate Highway System.

I guess you could say I had some options to weigh:

Option Number 5 seemed to be the choice with the lowest likelihood of significant personal injury and/or I-don’t-wanna-think-about-it-other-possibilities.

The thud was significant, and I pulled over to wait for all of the bells and whistles on the dashboard to tell me I wasn’t going anywhere.

That never happened. In fact, I couldn’t even hear anything rattling, nor did anything about the vehicle feel different when I made my way to the next town over to pull into a gas station for a better look.

Everything seems to be okay for now, oddly enough. I hope it stays that way. The dealership also gave it a good look, and they even washed the car before I left. I’ll say this, though–I’m a huge fan of coffee, but nothing in the world can keep you awake, alert, and paranoid on a commute quite like a large object in the middle of the road. 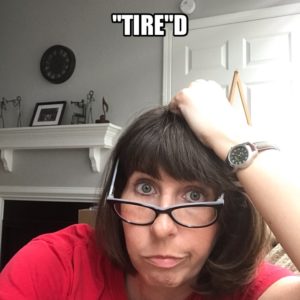