There’s no greater litmus test for the performance of your chosen brand of deodorant than moving twice in the South in one summer. It’s also an excellent test of your patience, general physical condition, and level of sanity (see also: crazy).

The only people who should be undertaking such quick-succession moving adventures are professional movers and college students. Well, I’m very obviously not a professional mover, and I graduated from dorm living quite a few years ago, so you’re probably thinking, “What possessed you to do THAT?!?” (Although you could be thinking about what to make for dinner or how to MacGyver your way out of an isolated mountain cave should the situation arise. I don’t know. I’m not you. Since you’re here, though, I’ll explain my scenario.)

It starts with stuff. Lots of stuff. And when you need to go somewhere else to live, you have to have a place to put all of that stuff–usually on a deadline. 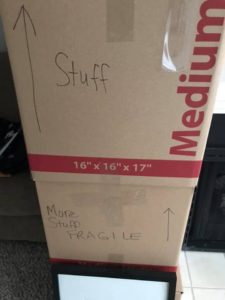 As one deadline approached (see also: end of lease), I found a place that would take me and my stuff. All the while, I had it in my mind that I would also be looking for a permanent place for me and my stuff, which I anticipated might take a few months at the least.

Yeah, that’s how things work for most people.

I’m not most people. If it can be made as complicated as humanly possible, I’ll take that path.

The day before I made the move to my “supposed-to-be-there-for-a-few-months” residence, I found a “gee-I-like-this-place-I-think-I’ll-buy-it” residence, which meant another move within approximately one month.

My friends were supportive. I believe the magic quote was, “Only keep out what you need to survive.”

So, me and my stuff did just that. (Sorry about the grammar. Me and my grammar are tired.)

Move No. 1. A long, sweaty Saturday. Stairs at both places. Deodorant status = NOPE. Although I had hired movers for the first trip–and they did a wonderful job–all of the little things end up being the most frustrating parts of a move. Once you’ve made twelve trips up and down the stairs for laundry detergent, vacuum cleaners, and socks you just knew you’d never see again, you begin to question your life choices (and the stability of your calf muscles).

First casualty of the first move–an end table. Snapped leg. However, there’s some mighty fine glue on the market these days, and the table was salvaged. It’ll limp for the rest of its life, but it’s still with us.

I navigated around boxes for a few weeks, reluctantly sighing each time I knew I had to dive into one for something I needed for survival, like a fork. A fork at the bottom of a pile of boxes.

You see, when you start to make a move, you carefully pack each of the first dozen or so boxes. Then, when you realize you’ll never find everything again anyway and that you’re going crazy trying to Tetris your way through the process, shoes and light bulbs become roommates with VHS tapes (yes, really) and coffee pods.

Just as I had begun to figure out which light switches operated the major illumination devices…it was time to go again. This time, though, it would be a mile-long bucket brigade of sorts, as I had found a place in the same neighborhood as the temporary residence.

Move No. 2. Stairs at both places (again…whyyyyyyyyy). Deodorant status = USELESS/ARE YOU KIDDING ME?!? First casualty of the second move–decorative plates for the end tables. No amount of glue was fixing those. I’d moved them a few times over the thirteen years I owned them; alas, the thirteenth year was the unluckiest, and it was time to bid them farewell. I found them smashed in the bottom of a box marked “FRAGILE” with a “THIS SIDE UP” arrow pointing the opposite direction of the eventual resting position of the box.

However, all things considered, me and my stuff are settling in for a while.

The litmus test on the deodorant told me that it’s time to switch brands…or, you know, NOT MOVE AGAIN FOR A WHILE.