I was plucking my eyebrows a few days ago when I had two thoughts: 1) ouch, it still hurts to do this, and 2) the VERY FIRST time I did this, it took about three hours because I was eighteen years old, ignorant about a lot of beauty-related things, and, as a result, was dangerously close to having a unibrow.

(Okay, those were several thoughts. Sorry about the math skills.)

Anyway, it’s never been much fun and it almost always makes me sneeze to tweeze. Guess the follicles are connected to my sneezer switch or something.

Anyway, anyway—back to one of those thoughts. I was thinking about the VERY FIRST time I plucked my eyebrows.

Does anyone ever call a “second something” the VERY SECOND instance? You rarely hear the word “very” as a modifier of “second” in that context.

Language study time. Do you think that at the second performance of the 1812 Overture, it was introduced with the word “very” in front of “second”? (They’d most likely have been speaking Russian, so just pretend they spoke English to make this easier.)

“Welcome, ladies and gentlemen, to the VERY SECOND performance of Tchaikovsky’s 1812 Overture!”

If you’d been in the audience (and if you’re reading this, I’m assuming you weren’t, because it was a long time ago and if you are still alive and remember the performance with any degree of clarity, you need to call a medical research facility pronto because they’ll want to run a few tests for everyone’s benefit here—have someone show you how to use a phone), you’d probably have heard something more like this:

“Tonight the orchestra will be playing the second performance of the new 1812 Overture by Tchaikovsky. Please express your final wishes to your families now in the event that you are injured by the cannons.” 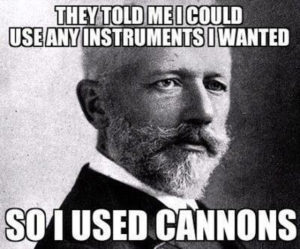 Seems like everything that happens the first time is expressed as the VERY first time.

“We just went to her VERY first graduation! Preschool! We only have thirteen more of these to go before she actually earns a real diploma!”

The only times you ever hear “very second” is when someone is referring to a minute unit of time. (Minute? See what I did there? Haha, yeah…at least I thought it was funny.)

“The very second he jumped out of the plane, he wished he hadn’t.”

“They timed that race down to the very second.”

No one ever says, “You remember the very second time we went to that new barbecue joint?”

Of course they don’t! If the trip was memorable for some reason, they’d just say, “You remember the second time we went to that new barbecue joint?”

“Very” is an interesting modifier that writers are told to use very, very sparingly.

Just something to think about the next time you talk about a very first…or second.