Fall is (slightly) in the air, and with it comes shorter days, cooler nights, pumpkin spice oxygen, and Halloween.

I was thinking about some of my old Halloween costumes a few days ago, and I realized that out of all the areas in my life in which I strive for perfection, I’ve been sadly lacking in creativity in this department.

Nearly every Halloween costume I wore between the ages of 8 and 12 looked remarkably like witch costumes. They were common, repetitive, and definitely within the format of “frightening” in the spirit of the holiday. (If you factor in this year’s creepy clown craze, my peppy little clown costume at the age of 7 might fit the “frightening” category; alas, it was still a rather common choice at the time, thus reinforcing my lack of creativity.)

I dressed up a couple of times in high school and college, but I can’t think of anything I did that I would classify as overtly “creative.”

In fact, I have only two costumes that I believe would qualify as being creative enough worth mentioning.

The first was on my return trip through college. I had been invited to a party, so I did what any self-respecting, late-twenty-something on a major budget would do…dug through the closet and got resourceful. When I discovered that I own as much plaid as a kilt factory, a 1970s anchorwoman was born.

The other was just a few years ago. I had decided to put together a costume based around my love of puns. Since everyone loves a superhero, The Pun-isher was the result.

I really would like to try harder this year. I have a few ideas, but the only spare “time” I have around the house is…this. 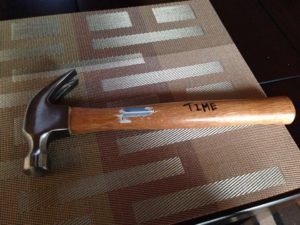 Perhaps I should carve out some time…just not from the wood furniture.

Best of luck to all of you out there who are putting together your Halloween costumes.

*By the way, in case you’re still trying to find all of the puns in the Pun-isher costume–a shoe fly, the bee’s knees, an Arkan-saw (from a set of toy tools), green with envy (green tape labeled with the letters NV), a belly button, cold shoulder, chip on the shoulder, an ear of corn, and, although you can’t see it, the cape says “Cape Canaveral.” The tool belt also contained a toy hammer labeled “TIME.”