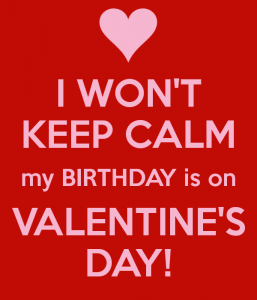 Being born on Valentine’s Day isn’t as cute as it sounds. My whole life, I’ve heard from people who would say things like, “Oh, that explains why you’re so sweet. How precious!” or “Your parents got such a special gift that day!”

I’m happy for them. But, really…what did I get from this whole deal? As a lady who isn’t exactly enamored with the color pink or frilly, overly-girly things, all I really think I got was an annual explanation for the flower delivery guy.

“Thank you, but it’s actually my birthday. My parents sent the flowers.”

Now, before you go calling me a stick in the mud, I do like chocolate, so I suppose that’s been one saving grace. And you have to admit that it’s at least somewhat special to go through life having been born on a holiday (albeit a rather polarizing holiday). It’s all I’ve ever known, but it’s a little…strange.

Then, there’s another issue under the surface…sibling rivalry. You see, my brother had to go and make his grand entrance into the world one year and a handful of days after I was born. (He thinks he’s here because our parents didn’t get it right the first time…and he’s the last-born because he was perfection.) However, this minuscule age gap created years of what I once considered unfair birthday rituals.

Because his birthday is the week following mine, in order to save time and resources, childhood birthday parties took place in between the two dates.

In other words, after my actual birthday, but before his.

(To be fair, I always received my actual gifts on my actual birthday. I’ll give credit to my parents for that one. I owe them a LOT, when you get down to it. Like…my life, for starters. Best birthday present I ever received.)

Our party on my sixth-plus-four-days birthday and my brother’s not-quite-fifth birthday was the first time I really remember noticing the issue.

My mom put together the party. She created a very short table for the two of us and our very short guests. After she added pillows to the floor for seating, we had our party room.

She also gave the party a theme–airplanes. Instead of “Pin The Tail On The Donkey,” we played “Pin The Propeller On The Airplane.” The tablecloth was decorated with clouds. The shared birthday cake was decorated with planes. If the party really got out of hand, flying ice cream would have been within the realm of possibility.

When the day of the big “Sixth-Plus-Four-Days and Not-Quite-Fifth-Birthday-Party” arrived, our little guests sat around the table playing with party favors while the mothers and big sisters and aunts and grandmothers served cake, organized the games, and generally kept us from breaking bones. We were each allowed to invite four friends. With my brother being younger and not quite in school yet, one of his “friends” was a default younger sibling of one of my friends. (Neither of them knew four people at the time, so we succeeded in expanding their social circle that day.)

I only have three pictures from that day, and they are mostly typical birthday party pictures. Two of them focus on all of the kids sitting around the little table. While the mothers and big sisters and aunts and grandmothers were all smiling and laughing and joining in on the games and watching us behave like kids, the dads and big brothers and uncles and grandfathers had slipped away to another corner of the living room.

The third picture shows the dads and big brothers and uncles and grandfathers.

By the looks on their faces, you could tell that the whole “putting these birthday parties together” thing wasn’t their style.

The next year, our party was at McDonald’s.

In time, the rituals began to change, and we grew to think it was pretty cool that our birthdays were so close. (I don’t think we’ve completely grown up, though. We’ve been mailing each other the same birthday card for a couple of years now.) And I grew to accept the fact that our arrangement for parties just made sense for the adults in our lives.

I still haven’t completely embraced the idea of Valentine’s Day–a lot of people haven’t–but I can at least enjoy the birthday part of it. So, if you’re like me and you’re not the biggest fan of Valentine’s Day, just take a few minutes to think about those of us who simply call it “Happy Birthday.”

And we’ll try to smile when you wish us a “Happy Valentine’s Day.”

One thought on “An Annual Event: Happy Valentine Birthday”