A lot of people have been having fun with the whole covfefe conundrum because–let’s face it–fun is fun. Entire websites are devoted to similarly hilarious text errors from everyday exchanges. I know that I’ve laughed so uncontrollably at autocorrect mistakes in the past that I thought I would have to seek medical attention.

Anyone on the world’s stage should expect to be under constant scrutiny, especially if social media communication is a yuge part of your daily routine (chuckle). Unfortunately, anyone within a few feet of a cell phone nowadays is at risk of becoming a YouTube sensation for little or no reason other than humiliation-style entertainment in this here internets day and age.

However, I think some of the real humor in this situation is that this particular error probably could not have been an autocorrect or predictive text mistake. In the context of the intended phrase, predictive text most likely would have changed covfefe to coverage. I did an experiment with my own autocorrect (typing in the first few letters of the word without any phrases surrounding it), and I ended up with the words coffee, covering, cover, and, oddly, even covfefe (But only because I’ve been using it too much lately. Not to worry…the little squiggles still appear under the word.).

Whether you agree or disagree with the president’s policies or philosophies, I think everyone can agree that he definitely marches to the beat of his own drummer. I would imagine the idea of an electronic device trying to correct his spelling wouldn’t appeal much to him, so my opinion (just my opinion–not fake news, alternative fact, etc.) is that he turned off the autocorrect/predictive text function (something I’ve wanted to do with mine about a thousand times a week).

Plenty of people seem to believe that this gaffe has received too much unwarranted attention, but you don’t have to go too far back to find out just how much, well, spelling counts. (So does math. Math always counts. Haha. Back to what I was saying…)

Here’s a brief list of a few well-known word issues that received plenty of attention despite occurring before the internet became the all-encompassing, speed-of-light source that it is today:

2. Strategery. Okay, I’m going out on a limb with this one since it was a Will Ferrell impersonation, but the reason it became an iconic pop culture reference is because it was not beyond the realm of possibility. 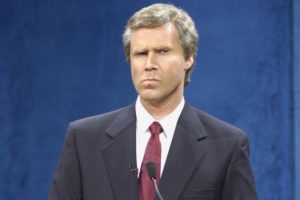 3. Nuclear. As in, nu-kyoo-lar. Yeah, this one’s not so much a spelling issue, but it was worthy of the list. Strategery was born of pronunciations like this.

I’m not trying to start a political debate here. Hey, we all make mistakes. I do think it’s been a nice, humorous diversion from the day-to-day madness lately.

Speaking of diversions…on the photography front, I’m hoping to take advantage of some beautiful new landscape opportunities in the next week or two, so check for updates! In the meantime, you can check out my current inventory of prints in my Etsy shop.